The Return of Beautiful Past Radio 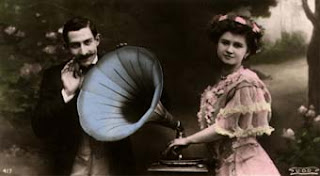 In the early years of my website, I had a couple of the old MP3.com radio stations that I had linked to the site so that people who viewed my paintings could also listen to the same music I listened to while painting. Thanks to a blog by Rebecca Chamberlain called Ladies' Historical Tea http://ladieshistorictea.blogspot.com/, I have revived the station courtesy of Playlist.com. The player can be found at the bottom of this blog and also on the home page of the website just below the navigation bar. To listen while viewing paintings, click on "Pop Out Player" and this will allow you to listen and navigate the site or continue to listen while you journey across the internet.

I have a lot of music on the playlist but I've not perfected the arrangement yet, and anyone who has ever received one of my mix tapes or CDs know that I work very hard on getting the flow of one piece of music into another just right. When I am not playing my 1907 Columbia BI Sterling or my 1918 Edison Amberola 30, this is the music I listen to while I paint. I choose the music very carefully and it often ties closely with the paintings. Many of these songs are dear old friends, especially everything by the Moody Blues, The Cure and the Baroque harpischord pieces. I have five copies of The Moody Blues classic 1967 Days of Future Past in vinyl. At least one of those copies is quite worn out. Newer musical friends are Black Tape For A Blue Girl, Dark Sanctuary, Dead Can Dance and Narsilion. This music is very ethereal and heartfelt and some of it admittedly darker than some of the other music, but since my paintings are sometimes about acknowledging the melancholy in our lives, so does the music I listen to. I find it very cathartic.

One of my gramophone records actually made it online. It's the exquisite Ave Maria with the early 20th Century Irish tenor John McCormack singing as the incomparable Fritz Kriesler plays the violin. I can't remember the exact date but was recorded sometime between 1912-1918. The recording delights me with its original pops and cracks wearing its age proudly.

Look for the arrangement of the playlist to shift many times until everything goes together just the way I want for establishing a mood and gently sustaining it.

When I was looking at Rebecca's blog, I couldn't help noticing the similarity of our interests and our tastes in music. Some of her music is also on my playlist. Later, I may do a radio station of music just for the gallery of my paintings and drawings of Charlotte. There are songs on this list that fit her very well not the least of which the Cure classic Charlotte Sometimes.

Thanks to Polly Singer for sending me to her friend Rebecca's blog.
Posted by Patrick Lynch at 6:49 PM 4 comments:

My Heart Cries Aloud For Thee--the portrait of Barnabas Collins

I have wanted to do this painting for a long time at least as far back as the days when I had my studio in the tower of Loudoun House, the 1852 Gothic villa that is a sister house to the more famous Lyndhurst where the Dark Shadows motion pictures were filmed in 1971. Dark Shadows fans remember well the original 1795 painting that hung in the foyer of Collinwood, and of the 1967 painting Barnabas commissions from Sam Evans. I wanted to do something different from either of those paintings. This portrait is set in the 1897 storyline era. I imagine a moment where Barnabas has found Josette's music box and he contemplates giving it to Rachel Drummond who bears a strong physical resemblance to his long lost Josette. The music box after all these years still works and its delicate melody sends Barnabas into a sad reverie.

Most people who remember Barnabas remember only the fanging and how sinister he seemed, yet he was even in the early episodes a much more complex figure and played with great humanity by Jonathan Frid. I was one of those kids "who ran home from school" to watch Dark Shadows but even as a six to eight year old child it was never about the fanging for me. Yes, when Quentin turned into a werewolf he was scary though Reverend Trask was far more frightening in the way he destroyed innocent people with maniacal glee without having a single bit of supernatural power.

However, it was Barnabas' sad longing for Josette that resonated across the decades.

Again, it wasn’t about the fanging, the ghouls and the werewolves. It was about one person whose only desire was to go home to his beloved and to his family. Imagine waking up in 1967 after being locked in a coffin since 1795 and you see a world that is both alien and familiar. Faces that you know inhabited by the souls of strangers. You want to find a place in this new life, and you don’t want your family to know what you’ve become. You were a good person driven by forces that sicken you even as you find it almost impossible at times to stop what you’re doing. As Barnabas once said to Quentin as a vampire he had his needs but they disgusted him. Just as you almost completely lose your conscience, the one person you love even more than Josette saves you–your little sister Sarah. With many mistakes made along the way, you choose a path back to being who you used to be even if a cure for vampirism is never quite permanent.
Not only do you have to learn the social customs of the new era but also how language has changed, the mysterious electro-mechanical devices of the 1960's. More importantly, once Barnabas began the path to redemption, he had to learn how to trust again, how to love without inviting the destruction created by his curse. Unlike Quentin Collins, Barnabas' curse was the result of perhaps giving his heart away too easily. Too much of a romantic, even during a romantic era.
All of this was running through my mind while working on this painting. I didn't want to just copy a photograph. I watched hours of Dark Shadows tapes, borrowed my very cool neighbour's DVDs of the 1897 storyline and found inspiration in fan made music videos on You Tube. The end result was a composite of many images to coalesce into Barnabas holding the music box and remembering and longing.

The immutable longing for love.
Posted by Patrick Lynch at 11:32 AM 7 comments:

I never thought I would find myself blogging. This from a person who had become weary of e-mail and telephones who started writing letters again on paper with my Waterman fountain pen and realised that I have more 78's and Edison cylinders than CDs and someone who watches his Dark Shadows tapes on a 1960's TV. A TV whose converter box allows it to tune in channels above 13 and whose tubes have to heat up before the picture and sound arrive and when turned off shrinks down to a little glowing dot whose ember lingers for a time.

So I don't know how often I will post, but the idea is that news for my website, exhibits I'm participating in and how the current painting is going will turn up here along with whatever else is on my mind as it relates to my paintings. It will also become apparent that I am a student of the Henry James School of Writing which means why use five words when five hundred will do.
Posted by Patrick Lynch at 11:00 PM 3 comments: