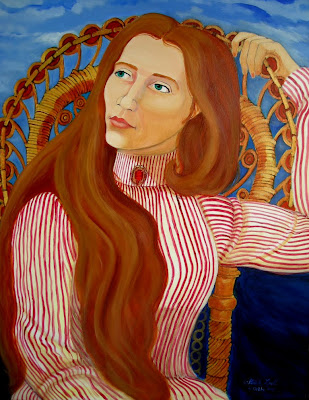 The 30th anniversary portrait of Charlotte Harwell, 2009, 24x30 inches, acrylic on canvas, actual painting title pending. Click on image to enlarge.
Early in the evening of 29 October 1979, a Sears Silvertone stereo is playing a borrowed 1967 first recording of the beautiful Pachelbel Canon in D. I am drawing a picture of a young lady in riding habit looking off to the side. It doesn't take very long to do and at the time I am unusually pleased with the results.....

The original 1979 drawing of Charlotte Harwell, 9x12 inches, graphite on paper.
We were all a lot younger then! Click on image to enlarge
It is hard to believe that 30 years have gone by since I drew the first picture of Charlotte Harwell. At the time, there was no way I could explain why I knew this but even then I was thinking about what a picture of Charlotte would look like 30 years later or to my later surprise that I would somehow still possess the Pedigree Stenographer's pencil used to draw the original image among my oldest art supplies. The link below is to the blog I wrote about her last year that gets a bit at why she had such an effect on me as an artist and as a person.

However, there is not a continuous stream of pictures of Charlotte across that span of time. There are some gaps around 1982-84 and between 2004-2006. There are four sketchbooks from 1987 to present and the paintings begin in 1980. Whenever I tried to learn something new about painting or drawing it was to Charlotte I turned. Given the amount of work I had done, I felt very vindicated when Andrew Wyeth's Helga pictures came to light in 1987.

In this portrait, I borrowed a pose from a lovely 1890's cabinet card photograph of a full length portrait of a lady sitting in a wicker chair wearing a striped dress. I retained only the upper body pose and the striped dress. The wicker becomes a cast metal. I had thought about retaining also the photographer's studio backdrop but after some consideration decided to go with a sky background with clouds near the top. Charlotte's long hair was just too beautiful to put up so I left it down in the flowing Pre-Raphaelite manner. Charlotte was a thoughtful person and given to moments of reverie. Reverie sadly became a terribly overdone subject for painters of the late 19th and early 20th Centuries. Frankly, I didn't care.

As Valerie described it, Charlotte looks as though she is participating in a conversation and is listening to someone that she finds interesting. Or perhaps Charlotte is listening to a favourite gramophone record....

Valerie and I have much to be grateful to Charlotte for as it was her face Valerie recognised when she first found my website six years ago. Valerie remembered her from our time in college and regarded her with much fondness. As we see it, Charlotte bridged the gap between our college years and the present day only to discover we picked up right where we left off as though no time had passed. Charlotte's birthday is a day of thanks for us.

Happy birthday, Charlotte where ever you are.... 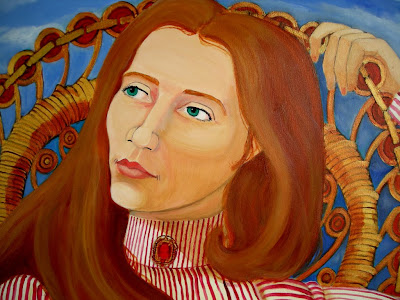 detail of Charlotte Harwell, click on image to enlarge.
Posted by Patrick Lynch at 9:55 AM 2 comments: 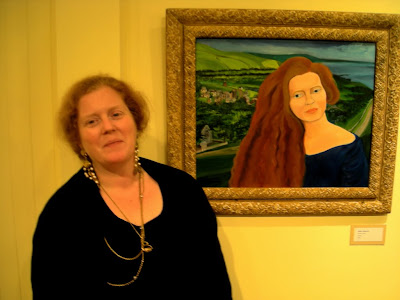 Valerie with Amor Aeterna
The opening last Friday for the Creative Harvest 2009 exhibit sponsored by Stoner Creek Arts was as delightful as last year's. There were 33 artists participating including Cliff Sullivan, Rebecca Chamberlain (of the Ladies Historical Tea blog) and Sylvia Zingg (a fellow Berea College graduate). It was a delight to see to see them at the opening. As you can see in the photo below, the event was well attended. 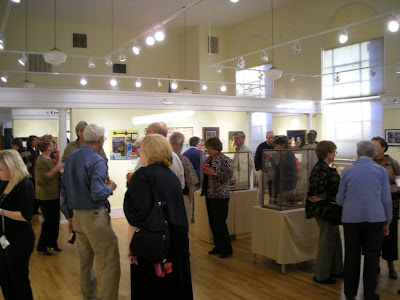 In the photo below, a view of Cliff Sullivan's Morning of Reflection. Click to enlarge. 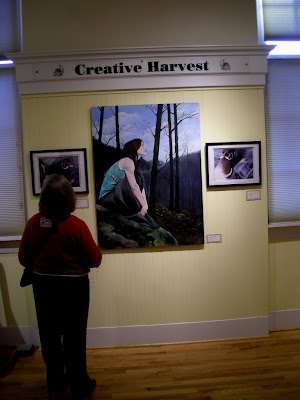 When artist bloggers meet: In this photo, Valerie and I are with Rebecca Chamberlain of the Ladies Historical Tea blog and the Bluegrass Drawing Society. We have a dear friend Polly Singer in common and we all have a great love of Pre-Raphaelite art in common as well. It was a lot of fun chatting with a fellow Dark Shadows fan. Rebecca's Ladies Historical Tea Society blog can be seen here: http://ladieshistorictea.blogspot.com/ 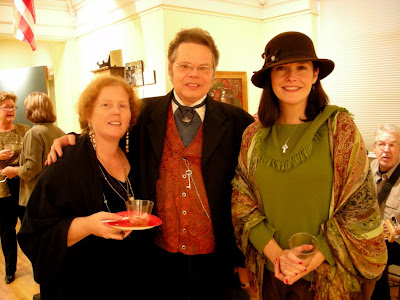 If you missed the opening, fear not. The Creative Harvest exhibit runs from 2 October to 19 December 2009, so there is plenty of time to see it yet. Not only are there some very lovely paintings on display but also some bronze sculptures and other 3D work. While there, be sure to have a look at the permanent Bourbon County exhibit in the front part of the Hopewell Museum and catch a glimpse of the rich history of Paris and the surrounding communities of Bourbon County.
Posted by Patrick Lynch at 10:56 AM 3 comments: