The Moody Blues-music for a desert island, a lifetime, the soundtrack for so many paintings and a dream that came true. 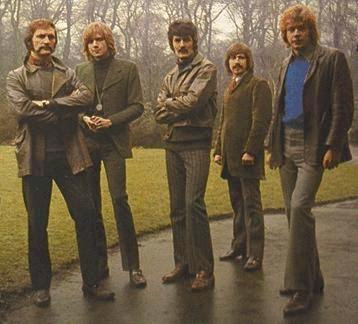 The Moody Blues 1969: Mike Pinder, Justin Hayward, Ray Thomas, Graeme Edge and
John Lodge.
This has been a summer of dreams come true and last night was yet another one. Valerie and I travelled to the Palace Theatre in Louisville to see The Moody Blues play live. I loved their music ever since I heard Nights in White Satin on a little AM radio when I was a child in the late 1960's. Okay, to be six or seven years old and love a very intense song about love is a pretty strange thing, but true nonetheless. Anytime the song came over the radio I was completely entranced and I treasured it so much that it was easy to call the song up in my mind whenever I wanted or needed to hear it.

By the end of the 1970's, I had found a couple copies of the 45 rpm single of their biggest hit Nights In White Satin with the song Cities on the flip side. The single got heavy play on my Sears Silvertone stereo. While I was in college in the early 1980's, I started saving up money to buy their albums and ordering from some long forgotten place that still had original 1960's and 70's records still in the shrink wrap. Hearing the entire Days of Future Past album was quite a revelation. Soon, I had everything from 1967-1981 and completely immersed myself in the world of their music.

Over the years, those records got me through both the good and bad years of my life, a touchstone that never failed to resonate. A lot of paintings were done with the Moody Blues playing in the background. I ended up buying duplicate or more accurately, replacement copies of favourite records that I had worn out. I have five copies of Days of Future Past, two of To Our Children's Children, Seventh Sojourn and On The Threshold of a Dream etc. I have some of the solo Justin Hayward/John Lodge records too.

The Moody Blues sang a lot about lost love, that one love that was never forgotten which tied nicely to the themes of my own paintings. They sang about Camelot and knights and to my mind that made them a rather Pre-Raphaelite band at times. They also sang a lot about hope and joy and they were fearless in being true to themselves even when the musical tide turned more cynical and base.

The Palace Theatre in downtown Louisville, Kentucky where they played last night is this incredible restored 1920's Spanish Baroque Revival place where nearly every square inch is pure eye candy. The ceiling of the entrance hall is covered in portrait busts of composers and writers and occasional statesmen of the last two or three hundred years, The performance hall is rich in statuary and the Spanish revival architectural style. When the room lights went down and the spotlights went up, The Moody Blues took the audience on an amazing musical trip through the decades. The band is down to three original members, Justin Hayward, John Lodge and Graeme Edge with Ray Thomas having recently retired. They added some new members for the tour to cover the flute and keyboards and had a second drummer on the riser. Without going into a huge review of the show, I'll say that The Moody Blues were as good or better than ever losing none of what made them great and having the experience and the good fortune to carry that into a fourth decade. At the end of the show, they thanked the audience for keeping the faith. I, in turn, thank them right back.

In the autumn of 1980, I was pining for a young lady for whom I was too shy to tell her how I really felt and the Moody Blues were spinning on that Garrard turntable singing songs that seemed to know exactly how I much I loved her.

Near the end of the summer of 2009, I sat in the theatre hand in hand with that very same lady I pined for all those years ago. We have a song we consider "our" song, it's from one of the more recent albums and it's called Bless The Wings That Bring You Back. After all the years of songs filled with longing and of lost love, the Moody Blues still sing about the love that was never forgotten. Only now it is the love that is found again.

The Moody Blues have a website with lots of interesting tidbits and information about what they're currently doing. You can rest assured that if I'm not listening to hundred year old records on my gramophone, I'm probably listening to these timeless musicians.

Thank you Justin, John and Graeme for the continuing journey....