At the time of this writing much of the eastern third of the United States is in an icy grip. My studio in Kentucky is very much in the middle of the winter maelstrom. Ice, then snow, then more ice, then more snow. Everything looks like its coated in frosted glass. This seemed like a good time to write an update on paintings in progress and to take a peek at my studio after some recent rearranging.

All of the paintings pictured are in the very early stages as far as I'm concerned. In at least two of them, the paintings are far enough along you can see where they are going while the other two are still too early to tell

As always, click on each picture to see the larger image.

This is the painting I'm currently spending a lot of time on. 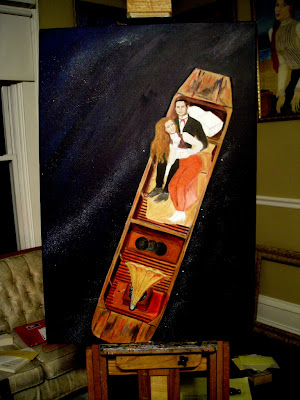 This was inspired by something I saw in a National Geographic book on the British Isles. I removed all of the figures except for this one couple cuddled together. My pose for the figures is loosely based on the original but I made several adjustments to it. Those who know me will recognise me as the male figure. I don't usually paint myself but I made an exception in this instance. The lady I am holding is the dearest person in the world to me and to say I love her would be the grandest understatement of this or any other century. More will be said about her in future posts when some of the paintings that feature her are complete. This painting is part of the night series I've been doing for a couple of years. Generally, I have been giving paintings with gramophones titles from old 78 rpm recordings of the era and I haven't settled on a title for this painting yet. For some reason, I am fascinated by images of boats floating in the night sky. Yes, it could be reflections on the water, but I like the idea that the couple are floating in a sea of stars. 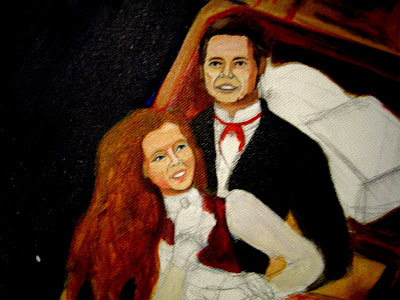 As I said, the painting is still in the early stages. I turned down the brightness in this image because the photo was a bit overexposed, but it kind of gets the idea across.

The painting below is from the same series and I had actually began this painting before the above mentioned work. Something about the boat was making me crazy so I set it aside to rest awhile before I wonder why I didn't finish the painting sooner when it hits me just why it was bugging me. 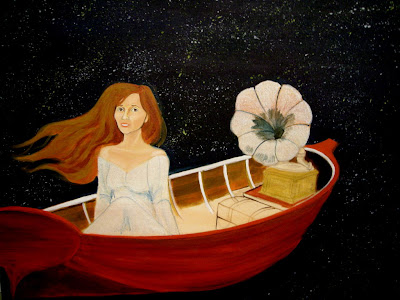 The next painting is of a mysterious Victorian lady pausing before an even more mysterious doorway. The outside is clearly set in day, but if she goes inside the structure she steps into the night. This painting is also waiting for me to look at it a certain way and then see just how to finish it. It is also a piece where I use older techniques combining coloured pencils with transparent glazes of acrylic paint. They tend to be a bit slow going. Mainly, this painting is a gestation stage where the work being done to it is more mental and hasn't externalised yet. 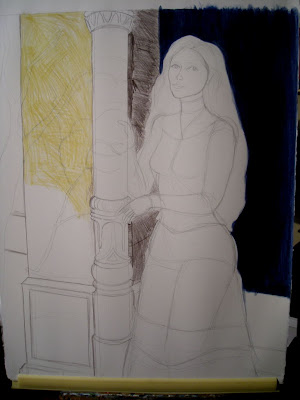 The final painting in this set is a painting I have wanted to do for almost thirty years. It is of the lady I am holding in the boat. As you can see it too is in the very early stages of painting. When I complete the painting, I will write a post on why she is so dear to me. A clue can easily be found in the painting's title: Amor Aeterna. The background which is too faint to see in this picture is of Cushendall in County Antrim, Ireland circa 1899. 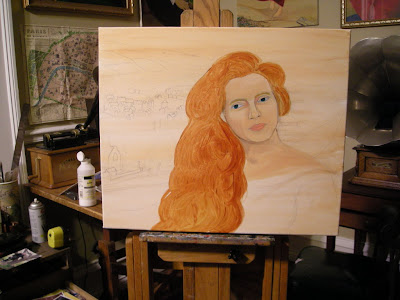 The purchase of a nice but amazingly inexpensive old table to put my 1907 Columbia Disc Graphophone on caused a partial rearrangement of my studio. The table is so sturdy it doesn't wiggle or wobble when I wind the gramophone. In the first picture below, there is a sock stuffed into the horn of the Columbia as a crude volume control. Ever wonder where the term "put a sock in it" came from? I moved my 1963 Pilot console stereo to the living room and shifted other furniture around and now the studio feels much larger than it really is. Below are some photographs I took a few days before our winter storms set in. 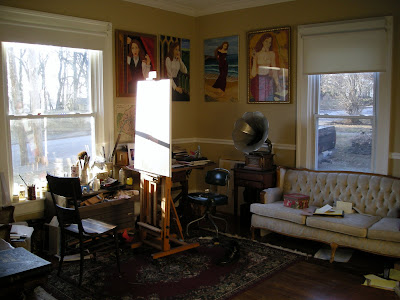 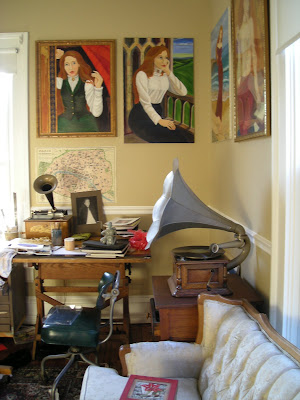 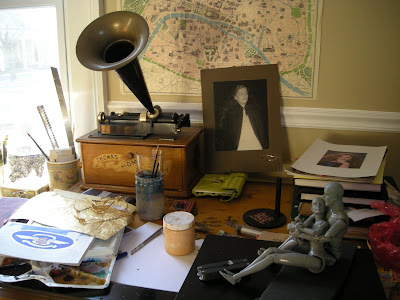 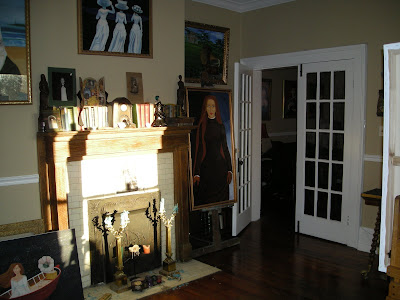 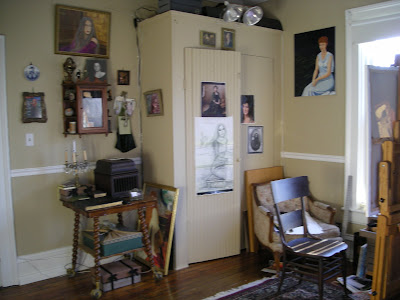 In other news, my old computer died at a most inopportune time whilst trying to add a USB hard drive. Needless to say, anything not backed up on CD was lost. This will finally force me to modernise my web creation software and rebuild the site from scratch to something I hope will be easier to update. My new laptop has a mind boggling amount of space on the hard drive and when the recalictrant USB hard drive comes back from the manufacturer, I should have ridiculous amounts of storage space and back up for everything. Until the site is rebuilt and uploaded, web updates may have to come in the form of this blog.

2009 looks to be a year of rebuilding and of change. Not just at the national level we are currently experiencing but also on a personal level. I, for one, am feeling very optimistic right now.
Posted by Patrick Lynch at 8:44 PM 2 comments: