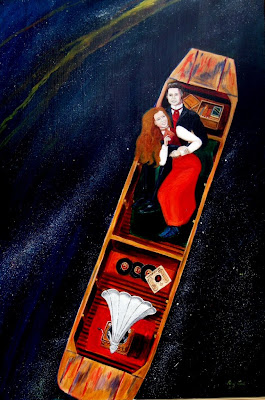 "....And this other human being and I had been enshrined in each other's memory for years--since childhood---and were now linked together by a tie so marvellous, an experience so unprecedented, that neither could ever well be out of the other's thoughts as long as life and sense and memory lasted."

I hardly know where to begin in writing about this painting. It would almost be easier to play music with the painting in order to describe my feelings about it. A stack of John McCormack 78's? Fritz Kriesler playing the Meditation from Thais, circa 1918? Something more modern perhaps? Nights In White Satin would do nicely along with the majority of the other songs by The Moody Blues featured on the music player at the bottom of this blog. A shame that Nights in White Satin isn't on a 78.

As always, click on the images for a larger picture. I still haven't fully settled on a title for this painting. Some paintings have a title even before the canvas is placed on the easel. I couldn't settle on a title for this one. The boat in the night sky paintings usually have titles based on one of my early 78 rpm records, but I also want to have a title based on the George DuMaurier novel Peter Ibbetson which is a book that the lady in my arms and I hold very dear. For now, the title is Dreaming True.

If you compare the painting to the photos of it in the previous blog, you can see there have been a few changes. Except for part of the horn, I painted out the previous gramophone and replaced it with my 1907 Columbia BI Sterling. The previous gramophone was actually a nicely rendered pencil sharpener but it wasn't quite good enough as a painting reference. I changed the contents of the boat behind the couple and added the vintage Victor Records sleeve by the 78's. The sky (or is it the night reflected water?) has more stars added and wispy elements that might suggest arms of the Milky Way.

As I mentioned in the previous blog, the couple featured in this painting are myself and someone I love very very much. I'm waiting until summer to say more when a wonderful new chapter begins in a very old story when two people who never should have been apart are finally together.
Posted by Patrick Lynch at 8:27 PM No comments: