Another Paris Artwalk has come and gone. First I'd like to thank Marilyn Campbell for hosting Cliff and myself once again. Marilyn was great as always! I am very appreciative of everyone who stopped by especially my co-worker friends in the library world, it was great to see all of you. I was also thrilled my friends Norma Gilpin and Beth Hensel were able to stop by as they are the models for two of the paintings I had on display. A special treat was to finally meet fellow Pre-Raphaelite art lover Rebecca Chamberlain who is an artist and art historian from Winchester and a dear friend of my friend Polly Singer. Rebecca also has the Ladies Historical Tea blog linked from my blog.

Turnout was pretty good, though once again the wind blew away our marker balloons that showed we were participants and we might not have gotten quite as many people as we hoped. For the next Artwalk, I will probably makes some larger signage and get my own sandwich board and rig up something to attach the balloons to.

Update: this is a link to Cliff Sullivan's blog on the same event with pictures 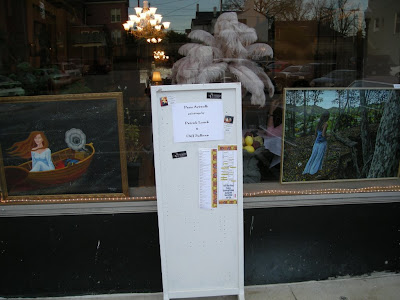 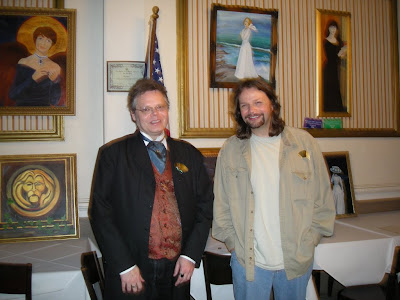 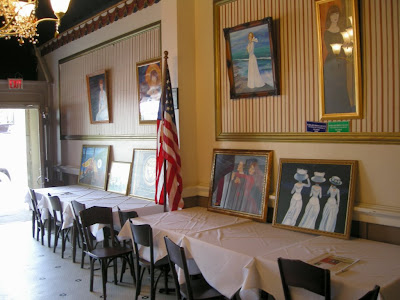 My paintings on display just before the start of Artwalk. 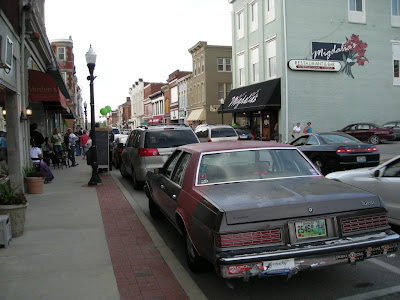 Some of the crowd later in the evening. When the exhibit space was crowded, I never had a chance to actually take any pictures. 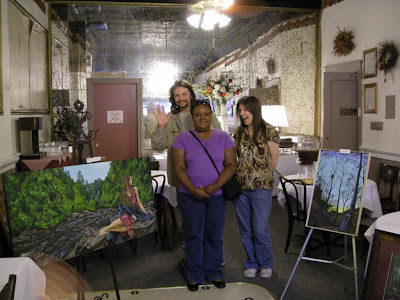 Cliff, his friend Brandy and his wife Melissa laughing at something one of us said. They are standing next my two favourite paintings of Cliff's. 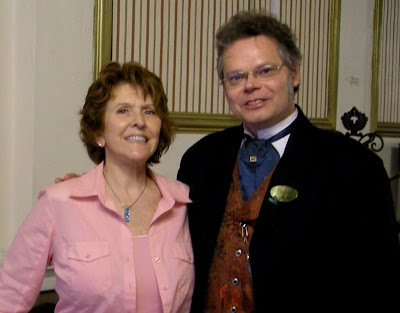 My very dear friend Norma Gilpin who modelled for the lady in the boat with a gramophone paintings My Heart Dreams of a Sea of Stars, Calling Me Home To You,For The Stars Help Me, And The Sea Bears Part.

My Heart Dreams of a Sea of Stars 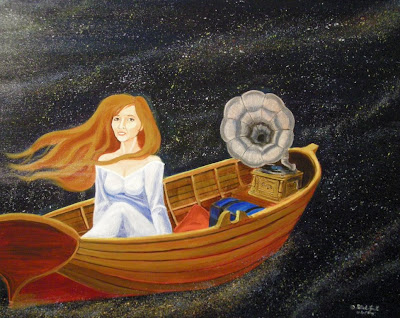 This painting is titled My Heart Dreams of a Sea of Stars. Click on any of the images in this post for a larger view.

After a long winter where it seemed that I wasn't getting anything done, I've now finished my second painting this spring. I had started it in the autumn but set it aside for a few months until I could focus on it better. This is the third painting of my friend Norma in a boat gliding in the night with a gramophone playing of a series of four paintings so far of people in boats with gramophones in a night sky. Why do gramophones appear so much in my paintings? I think it's because the outside horn gramophones are the perfect blend of romance and technology. They were comparatively portable and gave people who did not have musical talent a way to share music with a loved one. Some of that music can be heard on this blog's music player in the form of a block of songs by the Irish tenor John McCormack who in his day, was an international superstar. McCormack sang both opera as well as more popular songs including his famous and somewhat spooky "I Hear You Calling Me", a ballad about someone pining for his love who has crossed over. 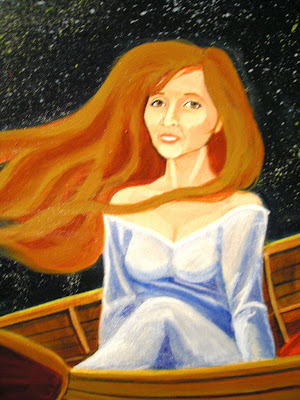 In the more fanciful paintings I'm doing, the gramophone is not only a symbol of romance but in a way an almost steampunk (springpunk?) propulsion system as the sound waves coming from the morning glory horn somehow propel the boat across the night sky. One might imagine the boat would move faster or slower depending on what was spinning on the spring powered turntable.

The gramophone is once again my 1907 Columbia BI Sterling. I'm rather partial to the Victor outside horn machines of the same era, but I actually own the Columbia. Those who are experts on these machines probably have noticed that my Columbia is missing the turntable ring and that the crank is in a slightly odd place. That's because the original motor was replaced with a double spring Victrola motor and the modifications were made with great care and to the untrained eye appear as original. The cabinet was refinished by Roger Rudd of the Kentucky Antique Phonograph Society and a reproduction "Columbia Disc Graphophone " label affixed to the front. I bought the machine from Brian Gorrell, a friend of mine who with Roger restore old gramophones and other antique phonographs. I got this machine knowing it was modified from the original and because of that more affordably. The stronger Victor motor probably plays better than the original. With a fresh needle and a good record it plays as well as it did in 1907. 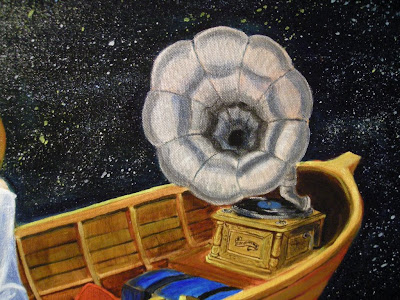 Now if I could only paint metal more convincingly. I'm getting the mass of the horn, but I'm still having trouble getting that metallic surface right. Maybe my brush strokes are too rough or thick or something. Sometimes I do subjects multiple times because it's as simple as trying to get it finally right. Of course it would be easier to paint Victor machines with their black morning glory horns but their unique petals present other interesting challenges. I've been painting the Columbia more because I have it in front of me instead of relying on my photographs of other machines.

More often than not, it is because there is something that continues to fascinate me about the people I'm painting that causes me to seek often unsuccessfully for that definitive statement of what that person means to me especially loved ones. The emotions felt inside always render pale any attempt at painting them. Is that because my feelings and the pressure of self imposed expectations are too complex to paint, or is it because I need a lot more serious art training than I got at Berea College 24 years ago? Probably a mixture of both. The 1980's were not a particularly good era for artists wanting to be a Pre-Raphaelite but that is a subject for a different blog entirely. I do know that some of the people I love most are the hardest to paint, not only because of my expectations but sometimes theirs as well. Maybe someday I can get out one of those pictures and say to myself "why didn't I finish that?" and then have the whole painting fall into place.

Whatever the reason, I do not intend to let my current limitations as a painter stop me from trying to do better.
Posted by Patrick Lynch at 9:41 PM 3 comments: