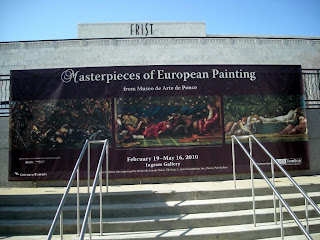 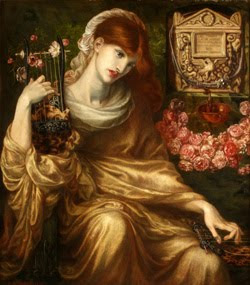 click on the images below to enlarge
Last Saturday, Valerie and I had the humbling experience of travelling to Nashville to see some Pre-Raphaelite paintings that were part of a travelling exhibit at the Frist Center for the Visual Arts. I won't try to cover all of the paintings we saw there but needless to say it was more than worth the drive. Information on the exhibit is at the link below.
http://www.fristcenter.org/site/exhibitions/exhibitiondetail.aspx?cid=793

It was Valerie's first viewing of a Rossetti and our first museum trip together so it was quite a significant event for us. The painting above is one of Rossetti's later works where he mostly focused on images of solitary women painted in very lush surroundings. This painting is called Dis Manibus, or Roman Widow. The model for this painting is Alexa Wilding and was one of Rossetti's favourite models towards the end of his life. 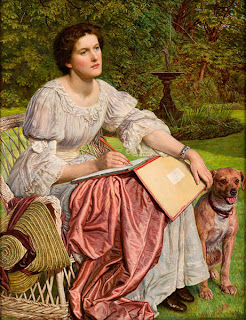 The painting above is by William Holman Hunt and is called Miss Gladys M. Holman Hunt (The School of Nature). Miss Holman Hunt was 16 at the time of the original sitting and when the model's face was retouched later by the equally incredible Pre-Raphaelite artist, Arthur Hughes, he aged her face a few years. I may edit this post later as I find out more about this. This painting is an example of how Holman Hunt followed the early Pre-Raphaelite painting principles throughout his life, the fidelity to nature, the bright colours even I can see, and yet, as Valerie pointed out to me, as realistic as the dog is painted, a close up examination reveals the animal is painted in a technique very closely resembling pointillism. It would be interesting to find out if the trends of late 19th Century art had any effect on this early to mid Victorian artist.

We also saw three of Sir Edward Burne-Jones Briar Rose series paintings displayed together. There was a bench situated in front of them. We needed it. Seeing them together was an emotional experience that at the moment defies my ability to describe it. This painting is called The Sleeping Beauty. 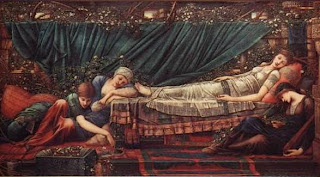 Why was it a humbling experience? For the last thirty years, these are some of the artists I've looked to in finding my own way as a painter. No amount of looking in books can prepare you for seeing the real thing. What strides I've made in my own work seem to pale in the reality of those who came before me. You can also see the benefits of a 19th Century English Royal Academy training in giving one the tools to paint what the heart's eyes see. Yet there are things that connect us in mundane ways. Years ago, I was looking at a watercolour by Rossetti and discovered he was using exactly the same D'Arches hot press watercolour paper I was using. The same paper that had been made literally since 1492.

There have been times after viewing such work, that I wonder why I continue to paint my strange little pictures and not paint for a few days, but then I don't give up easily. I may never reach the same skill level possessed by these artists of another time, but we do share a love of painting a beautiful romantic world that may have never existed except perhaps in the quantum reality of art.
Posted by Patrick Lynch at 1:02 PM 2 comments:

In this part, I am starting to pull things together. Additional ivy has been added near the base of the column and the decorative element below. I don't consider it complete yet, I may add more leaves and try to build up the density of growth at the lower left. For this round, I've added lighter colour leaves over some of the darker background leaves. I also worked in the some of the darker green into the stone behind the leaves. Click on any image to enlarge. 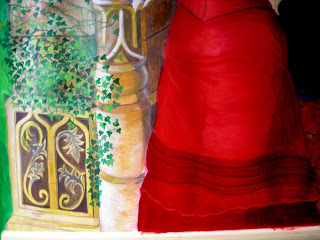 In the picture above, you can also see the additional glazes of vermilion red, permanent alizarin crimson in the lower skirt. Some of the red and crimson is mixed together. The lighter part of the skirt is drybrushed. The idea is the lighter colour is a different texture than the horizontal darker fabric near the bottom of the skirt.

In the picture below, you can see where I have started to glaze a mix of raw sienna and yellow ochre into the model's hair. The hue deepens with addition of the glaze. The strands of hair drawn in coloured pencil is still visible through the glaze. The work I had done on the skirt has also been done to the tunic. The shadows are a bit exaggerated so I don't lose them as I build up the rest of the colour. At this point, I've done nothing yet to the skin tones on the face or hands other than what was originally put down in coloured pencil. 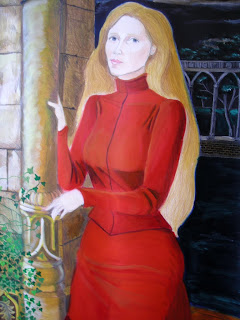 The picture below is a close up showing the glazes in the hair and the original coloured pencil rendering of the face. I like it, except that now that everything else has been built up to a certain level leaving an area only in coloured pencil seems weak compared to the rest of the painting. I'm now treating the original pencil work as an underpainting to the acrylic that will be applied over it. 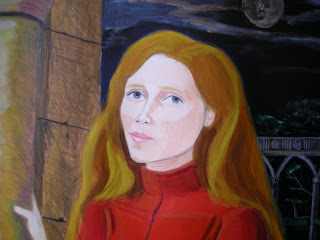 In the final picture for this segment is the model's face with the first bit of paint over the coloured pencil. At this stage, I'm not happy with it at all. This is where my colour blindness rears its exasperating head. The initial mix is titanium white, yellow ochre, burnt sienna with the tiniest amount of cadmium red. Cadmium has extremely strong tinting powers. Even the tiniest amount I had used was probably still too much. 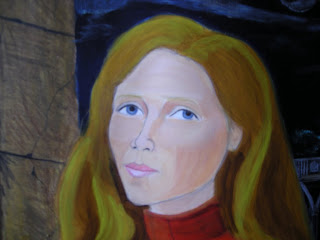 As I work more on the face, the goal is to first get the colour mix under control with the idea of getting it as close as possible to the model's actual skin tones. The coloured pencil actually did that quite nicely. The more challenging problem is to do that with the paint because when I am finished I want to be sure that the viewer is drawn towards the model's face. At the time of this writing, I have not yet attempted to work another layer of colour pencil over the paint. If I like the results of that, I'll use the pencil to smooth and blend the face. If not, I will continue adjusting the mix until I get it right. In order to achieve that, I will test out the mixes on a separate piece of watercolour paper and hold them next to the face to avoid the risk of overworking.
The next entry will focus entirely on her face.
Posted by Patrick Lynch at 9:14 PM No comments: