A Painting in Progress--part one

Finally, I get around to writing a blog about a painting in progress from a technical standpoint. This is a painting of a friend of mine who is standing at a doorway between day and night. The majority of my work is done on canvas but I still enjoy working on Arches hot press watercolour paper mostly in the 140 lb weight but prefer 155 or 300 lb hot press when I have it. 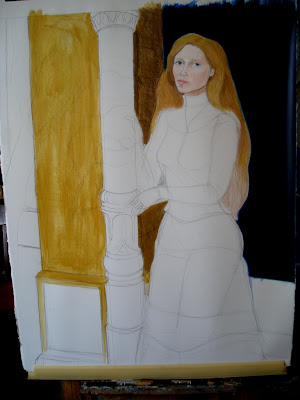 click on image to enlarge
In the view above, one can see that the painting is started with a drawing in pencil on the paper. I work out the figure, the clothing and the overall composition of the painting before adding the first layer of colour. The area behind the figure which represents Night started as multiple layers of indigo blue that are blended with isopropyl alcohol using a small cloth to work the pigment into the paper. This gives it a nice grainy texture but it wasn't dark enough so I mixed a batch of ultramarine blue and burnt umber into a thin glaze and went over the area again. While the initial glazes remained thin, I added an additional layer of the indigo blue coloured pencil to keep the grainy texture present. After about four layers, I stop. 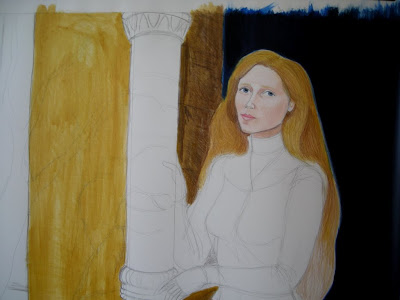 click on image to enlarge
In the close up view above, look at the top edge of the painting you can see where the coloured pencil and the acrylic glazes spill off the edge. I'm debating with myself whether to extend the composition all the way to the top of the sheet or leave it as is so it fits a standard 22x28 inch frame.

To the figure's left is a wall of a building. The wall began with layers of yellow ochre and golden brown before thin glazes of yellow ochre acrylic were applied. I kept it rougher so that the wall would appear aged. At this stage, I am not too concerned with the edge of the wall. That will tighten up somewhat as the texture of the wall takes on more depth. As the painting progresses, it will become more apparent that it is some kind of stonework with vines and ivy and other foliage on top. 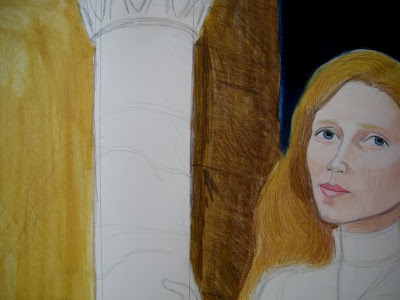 Acrylic paint is the Winsor and Newton Finity series and coloured pencils are either the Prismacolour brand or Derwent watercolour pencils.

The painting started out attempting to use a photo I have of a young girl standing at a door that opens into some kind of structure that is part of a Victorian photo studio backdrop but scale it up to adult proportions for the figure model I wanted to feature. Scaling up the proportions caused other problems that I wasn't ready to solve so I kept the column the girl was leaning on and discarded the rest. Perhaps in a future painting. Either way, I wanted to explore the idea of standing on the edge between Day and Night which I'll take up later as the painting is finished.

I'll be glad to answer any technical questions as I can. I don't believe in keeping technical secrets when it comes to how I do my paintings. What I've learned from others I find a way to make my own. I would expect others to make their own anything I share.

Over the coming weeks, future posts will take up where this one leaves off in recording the progress of this painting. I actually had started it in the autumn of 2007 and it seemed that it needed a long gestation period but now it feels like it's coming together now. Sometimes what seemed hard at the time will make me wonder why now when it seems so much easier...
Posted by Patrick Lynch at 1:40 PM No comments: