From Her Voice Came The Music of the Centuries 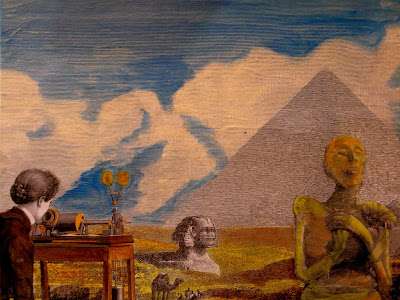 From Her Voice Came The Music of the Centuries
collage, 11x14 inches
Click on image to enlarge
This is my latest collage from the Penny Dreadful series. In this one, a Victorian lady is singing into a very early cylinder phonograph that is powered by weights/counterweights located under the table while a mummy listens with rapt attention. Though it is hard to tell in the photograph, the sky is painted in iridescent white and some of the white is mixed with the gold in the mummy. When the light hits both the sky and the mummy just right, they glow. 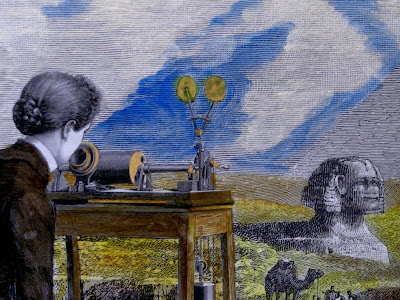 In the detail above, one can easily see the transparent glazes painted over the image. I don't like to obscure the engraver's lines if I can help it. As I look at this, it seems to me that the detail image is a composition in its own right which I may explore in the near future. Regrettably, I've forgotten the make and model of this particular phonograph but it is an actual recording/playback device from the 19th Century. 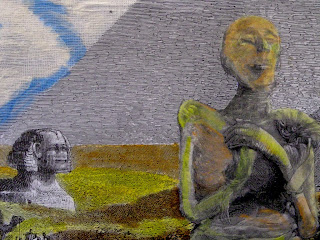 The mummy was just too good not to use in something. I particularly enjoyed the rather rapt expression on his face. I painted him with a mixture of transparent yellow, renaissance gold and a bit of iridescent white to give him that supernatural quality. He appears to be listening deeply to something and I couldn't resist combining the mummy with the phonograph lady. I'm also endlessly fascinated by thin the veil between the Past and the Present can possibly be.
As I look at both of the detail images, I'm thinking of actually turning this into a triptych and find a way to frame all three images together. I'd love to know your thoughts about this.
Posted by Patrick Lynch at 3:03 PM

Brilliant, like Max Ernst's collages they invite me to journey inwards...

As to your 'The First Night Of Autumn', this is a beautiful painting. It strikes me at many levels.

The poetic interpretation I have of its title, formulating ideas about a sad remembrance that we may have progressed since days gone by, and learned many new things. But what have we lost along the way. The element of grace and the sense of wonder.

This is a beautiful painting that in me evokes nostalgia and a yearning for those times when you could still hear at night 'the wind in the rosebush'.